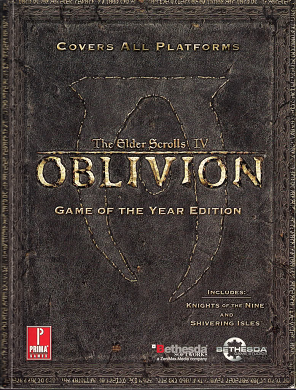 Uploaded: 20.06.2022
Content: text 17 symbols
Loyalty discount! If the total amount of your purchases from the seller SOFT-KLUB more than:
If you want to know your discount rate, please provide your email:

The Elder Scrolls IV: Oblivion® Game of the Year Edition is one of the best RPGs in history. Step into the brightest and most detailed game world. You can go only along the main storyline or plunge into this world with your head and find for yourself many interesting and varied tasks.

The Game of the Year Edition also includes the Knights of the Nine and Shivering Isles add-ons, which will add many unforgettable missions to the vast world of Oblivion. After playing this, you´ll understand why critics consider Oblivion the best game of 2006.

Features of the game:
★ Live your life in the gaming world.
Create your own unique character and become anyone you want. Be a noble knight, a ruthless assassin, or a powerful magician.
★ First person combat
The new first-person combat system takes standard RPG elements to the next level.
★ Advanced AI
New innovative artificial intelligence is one of the main assets of Oblivion. Each character lives his own life and pursues his own goals. They independently decide when to go to sleep or eat, go to a tavern or shop. It is impossible to predict what is on the mind of a particular character at the moment.
★ Explore new lands in the Shivering Isles Expansion
Shivering Isles takes you to Shigorat, which is divided into Mania and Dementia. Which way to go you decide for yourself.
★ Fight dozens of new enemies in the Shivering Isles Expansion
Shigorat is filled with hideous and hideous creatures.
★ Revive an ancient order in the Knights of the Nine expansion
The Order of the Knights of the Nine was disbanded a long time ago. You are entrusted with a mission to revive the order and return it to its former glory.
Additional Information