The tax scheme which landed FOR KHODORKOVSKY 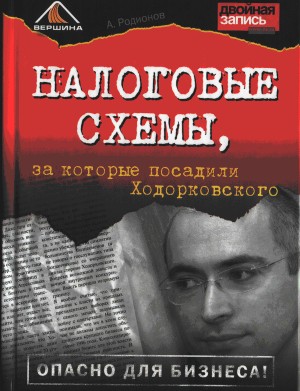 WMPN information about the seller and his items
offlineAsk a question

For the first time available to a wider audience

Everyone is talking about Khodorkovsky, but none of that business, it changes the game. For the first time published a book in which case "Yukos" is considered from the tax point of view. This bestseller - Guide to the Russian tax schemes! It not only talked about schemes themselves, but also on how to apply them in practice in order to avoid negative consequences for the business.

State clearly explained that those rules by which all work - illegal. This applies not only to taxes, but also to many other areas of business: selling products, cooperation with mediators, establishment of companies ... It was clear from what normal operations should be abandoned, because the judge considered them criminals, which documents and business actions can be used consequence a charge of tax evasion.


Boris Nemtsov,
member of the Federal Political Council of the political party "Union of Right Forces."
- "Perhaps for the first time given such a detailed and professional analysis of the economic component of the" Khodorkovsky case ". The timely, and most importantly, very useful from a practical point of view the book. But still, I'd like to believe that it will be the first and last of its kind. "

- "Entrepreneurs have to understand one thing: if you want to plant them, then regardless of whether they have committed a crime or not, this is not a legal state of jail. That is the main lesson of this case. You can only advise to try to live in peace with the government, as far as conscience It allows. "

Related to item "The tax scheme which landed FOR KHODORKOVSKY":

How to Properly himself registered firms + All About STS