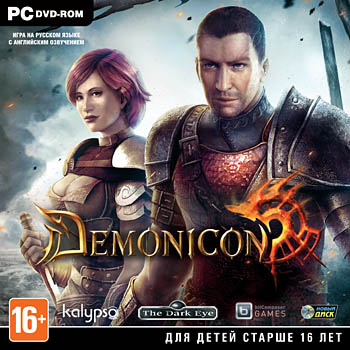 Uploaded: 22.05.2022
Content: text 19 symbols
Loyalty discount! If the total amount of your purchases from the seller SOFT-KLUB more than:
If you want to know your discount rate, please provide your email:

Demonicon: The Dark Eye is an RPG from Noumena Studios. Demonicon tells a gripping story of betrayal, intrigue and dark forces. Your adoptive father is an exiled killer. He pursued the love of his life, intent on killing her indifferently - at least that´s what the cunning courtiers say ... But is a loving adoptive father really guilty? Did he really intend to kill Kalandra, the beautiful daughter of a wealthy alchemist? Or is he a victim of vicious slander? You have to unravel all the mysteries of the Demonicon.

• Dynamic RPG with a third person view, furious hit combinations and stunning magic spells
• A narrative replete with unexpected turns and ambiguous conflicts, which often requires making difficult decisions
ВЂ Saturated battles, get an advantage, in which observation and thoughtful tactics will help
• A unique system of magic, which gives the heroes devastating power and gradually changes their appearance
• Crafting allows you to brew potions, poison blades and enchant armor
• Gorgeous 3D graphics that fully reveal the capabilities of the Havok Vision engine
• Detailed game world, which is part of the universe of The Dark Eye